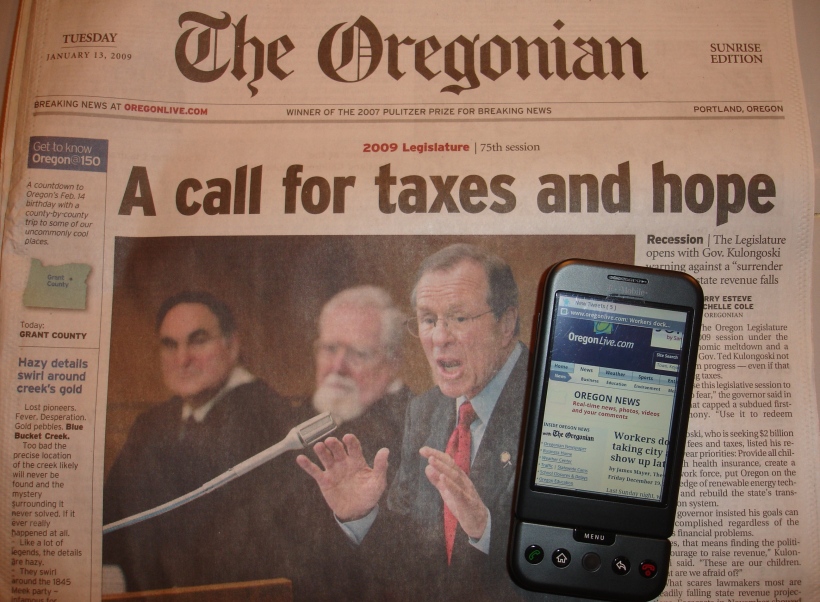 As audiences demand more access to online content, community newspapers across the globe struggle with finding a delicate balance between the old and new. Photo by Colette Cassinelli, Flickr.

When news of the massive mudslide reached editor Nicole Trigg on her day off in July 2012, she didn’t hesitate. She dropped everything, jumped in her car and sped down to the scene. Mesmerized by the incredible force of nature at work, Trigg got to work at the Fairmont Hot Springs Resort, gathering shots of the damage to the resort using her personal camera and conducting interviews with eyewitnesses who were clearly still reeling from the experience of witnessing such formidable destruction. The resulting video of the breaking news aftermath, as well as a breaking news article, was posted by Trigg on the Columbia Valley Pioneer newspaper’s website and not long after, the video was picked up by national media, the Canadian Broadcasting Corporation. As Trigg noted, herein is an example of the power of online journalism, which, as she says, is “great and far reaching.”

Debris from the mudslide that swept through the Columbia Valley, BC on July 15, 2012. Photo by Nicole Trigg.

This is a tale occurring across the land as not only media giants but the humble community newspaper struggles to shift and adapt in the changing seas of digital media. Where in the past a journalist would snap a couple of photos that would appear in print later that week, this video was posted online within hours of the event and quickly spread across the country.

It’s obvious that adapting is the key to survival in these uncertain times of descending subscription rates and changing needs of audiences.

The evolution of the audience

And audiences are indeed changing.

Jay Rosen, media critic, writer and professor of journalism, captures the essence of this shift in his blog, The People Formerly Known as the Audience, wherein he explores the new expectations of the audience in a mock letter to media people.

He describes the new audience as the writing readers, the viewers who use video, the formerly atomised listeners who now have the power to connect with each other and speak to the world.

Formerly on the receiving end of the highly-centralised old media system that was top-down, that had high entry fees and a few companies in competition to talk loudly while the rest of the population listened in isolation, in the past audiences had little power to influence the media other than to write letters to the editor and phone in to their local radio station.

My, how times have changed.

Rosen describes how the invention of the blog has delivered freedom of the press to the people; once the editors of the news, now citizen journalists can edit the news and choose front page material; while shooting and distributing video was once the realm of Big Media, nowadays users can make and share videos in a way never seen before, thanks to YouTube and other social media outlets.

The champion of the citizen journalist, Dan Gillmor writes in his book, We the Media, that we stand at a time where people can bring strong alternatives to mainstream media.

“…the grassroots are transcending the pallid consumerism that has characterized news coverage and consumption in the past half-century or more. For the first time in modern history, the user is truly in charge, as a consumer and as a producer.”

This shift in power is tangible in the way that users engage with media, as Tom Curley, CEO of the Associated Press points out, “The users are deciding what the point of their engagement will be — what application, what device, what time, what place.”

The former audience is now the active audience that is very much involved with the media and wants to share, discuss and create, which means the press is now divided into pro and amateur zones that have a degree of overlapping and interacting.

As Rosen says in his blog, “The people formerly known as the audience are simply the public made realer, less fictional, more able, less predictable.”

So let’s turn our attention now to the humble community newspaper existing outside the parameters of the big smoke, yet working with this new audience just described. How are they coping? Are times changing for them as well or are they operating in a time warp compared to modern fast-paced city newspapers?

Trigg, the editor of The Columbia Valley Pioneer, whom we alluded to at the start of this story, has a lot to say about this topic.

Located in the small mountain town of Invermere, in BC, Canada, the Pioneer publishes 6,400 print newspapers to locals and visitors to the valley each week. Trigg says that while she has seen an increase in regional sharing between sister papers due to easy access to online stories and an increase in the newspaper’s social media presence on sites such as Facebook, the print newspaper still rules.

“Print is still king for my area and print ads are still the main economic driver,” she explains. “This is likely due to the tabloid full-colour format of the free paper I publish as well as this being a tourist destination with lots of visitors who like to pick up the paper to have something in their hands while they’re here. The paper is also a coffee table favourite among locals. It’s actually company policy not to let online draw attention away from the money-making print product. Online access to the subscription-based paper I put out is protected by a paywall.”

She describes her dilemma as her bosses started pushing for more of an online presence but then cut her staff which, she says, keeps her scrambling to stay on top of the newspaper print edition.

“I think one point to make is how difficult the transition to online can be when a news team is already swamped working on the paper product, which actually makes the money because advertisers are preferring to see their ads in print rather than online. Online sales here are negligible. Ideally I would hire someone who could make online their main focus, something I have yet to see materialise despite my many requests.”

Clare Ogilvie, editor of the Pique Newsmagazine in Whistler, BC echoes Trigg’s sentiments.

When she took over as editor of the community newspaper five years ago, the first thing she did was re-launch the digital website and move to a seven-day-a-week staffing model.

“With such a tiny staff it is really impossible to do justice to the news that is happening daily but we try,” she said in an email, adding that reporters struggle as they are being asked to do more for less money than they have ever been asked to do before.

Ogilvie notes that they have a reporter on staff who makes amazing videos (an example can be found here) which they try to use, but the reality is there often isn’t enough time to post videos.

“We don’t make any money from it… so it is pretty far down the list of priorities,” she said.

So once again we see how the role of the community newspaper has changed dramatically over the past decade. Ogilvie says that there are several factors contributing to this. One reason lies in the staff cutbacks at large papers, so the daily newspapers (dailies), such as the Vancouver Sun, now frequently take stories from the weekly newspapers (weeklies), such as the Pique, rather than do their own research. Dailies and weeklies often “share” content, which is another strong solution, she adds.

She is quick to point out that at the root of these changes is the fact that the world has gone digital.

“People want information now,” she notes. “And they don’t want to pay for it either — and since they can mostly get it for free, the digital side of media has not been able to figure out a way to monetize it. Dailies have been forced to go digital in a big way, but they are not making any money from it.”

The move to digital has also forced community newspapers to keep up.

At the Pique newsmagazine, this has led to the seven-day-a-week staffing situation, constant updating of the website, as well as social media postings throughout the working day. Her staff are active on Pique’s Facebook and Twitter sites and there is an expectation that reporters will post to social media when they are at events, even if they are not working.

So it seems that our community newspapers are facing some unique challenges in this new digital era, ones which are ultimately attached to the newspaper business model.

But there is optimism in amongst the grim facts of overworked and underpaid staff labouring away at community newspapers all across the country.

Ogilvie says that as a result of all these changes, communities now rely more and more on their local newspapers for information, and this should be seen as the silver lining in an otherwise challenging situation.

“This gives local news organisations a unique opportunity to become indispensable, and is one we should all embrace.”

~ Originally posted on the COMM5602 blog for the unit Online Journalism at UWA. November 2015